This is my son Daniel shortly before his first dance performance.  He’s 7.  He’s pretty excited although he’s trying his best to act casual for this photograph. 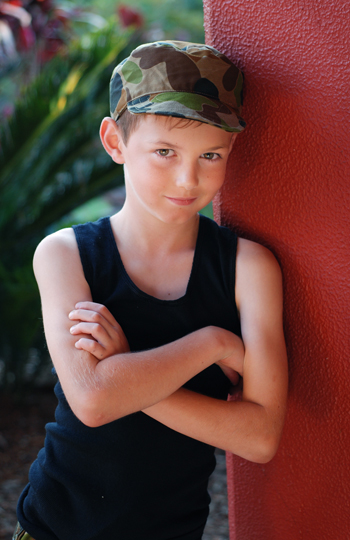 A casual portrait photograph of a young boy with attitude.

This was a late afternoon shot when the sun was still warm in the sky and the light is actually coming from the right of the image on the other side of the wall that Daniel is leaning against.  It was reflecting off the burnt orange walls and creating a lovely warm glow.  I did use photoshop to take the colour down to a cooler temperature though as it was a bit much!

Don’t be shy to experiment with positions when you are outside – positions relevant to the light.  The light in this spot was very different when I had my subject facing the other way.  Try some silhouette shots perhaps, with the sunlight spilling out around your subject’s head.

This casual pose is great for younger boys – they can keep their hands occupied and because Dan’s shoulders are down he doesn’t look withdrawn.  The head tilted down and the eyes looking back up also give a playful feel to the photograph.